The first thing many think of when mentioning Egypt is the pyramids. One of the world’s seven wonders, I’ve heard countless stories of how the sheer magnitude of the pyramids shocked people to their core when they first laid eyes on them. However, for me, having grown up in Shanghai- where there are countless splayed 50 story+ buildings, and as someone who grew up moving around and has grown somewhat immune to new sites (relatively speaking), it wasn’t the sheer magnitude of it that had me in awe. It was it’s beauty. It was truly beautiful, and I’m not sure how they built it. It was unique. How on earth did we these structures, some 4000 years ago, and now, in 2018, with self-driving cars, Sophia the robot, Tesla flinging cars into space, China’s wechat’s monopolisation of everything, AI, etc., we cannot figure it out? We now have the tools of the scientific revolution, the industrial revolution, the enlightenment, and so on and so forth… 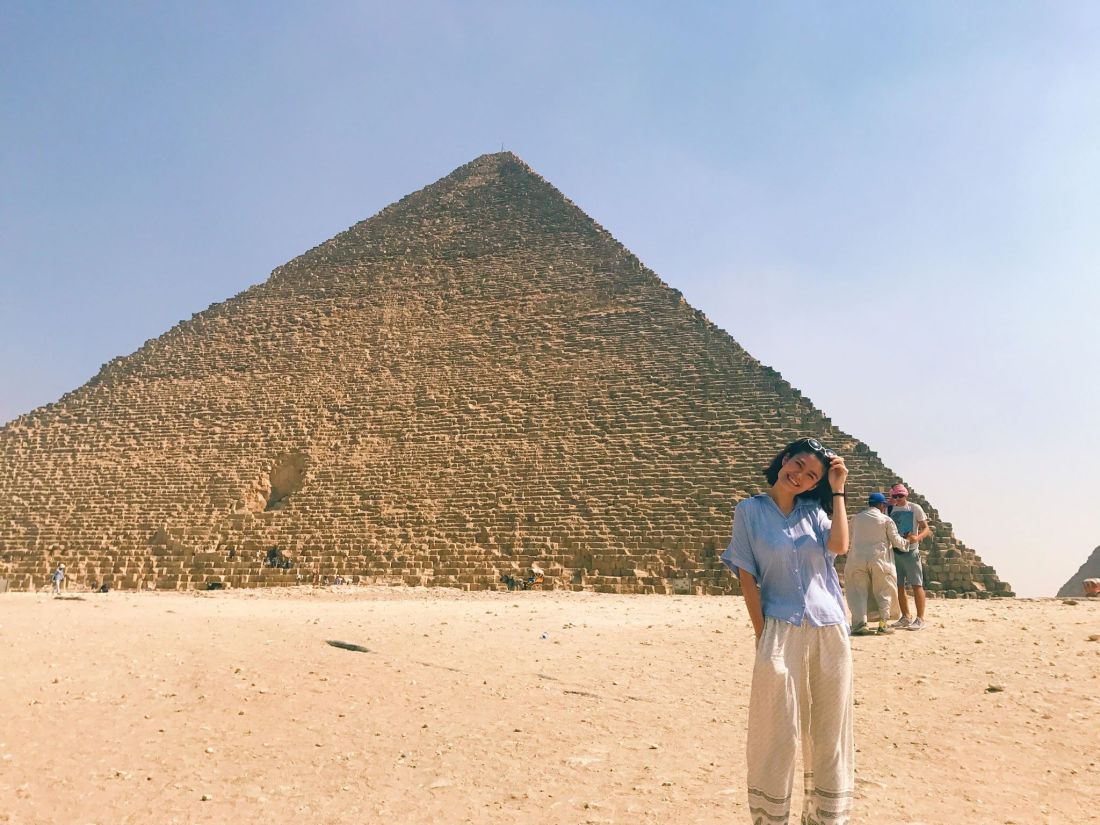 In this day and age, science is our religion. Those that question, how do we know what we know, are called “flat-earthers”, marginalised and shamed, similar to previous eras whereby doubting God would cause you marginalisation and ostracisation from society, and being name-called “Devil worshipper!”. Of course, the degree to which the marginalisation is drastically different, as no longer burn or drown those that question our systems of beliefs. All the recordings we have found of the beginnings of homo sapiens, has shown that systems of beliefs come and go. There was a time when we believed in the rain and sun gods, there was a time where we believed the sun rotated around the earth, where we believed we were the center of the universe. Today, we believe these to not be true, however our mistake is being arrogant, and most of all, hypocritical, by believing we have found the unshakable Truth. If we can see, through history, through artifacts, through recordings, we would know that we have never found the unshakable Truth with a capital T, but only some form, some distortion of truth. Yet we forget this. Our greatest mistake is we do not learn from our past. Otherwise we would understand science cannot be Truth with a capital T, and to believe otherwise is arrogant. Have we really answered any of the fundamental, real, questions? These are what I believe to be some of those questions…

The evolution of warfare, shows a seemingly incredibly progression in human society. We used to fight each other with sticks and stones –> swords –> guns (evolution of guns) –> tanks –> planes –> drones —> ?

The word progression is key here, because, so what? We have found ways to become more efficient at killing each other.  To communicate with each other quicker through ICTs (information and communication technologies). For me to be able to use this platform to reach out to people I otherwise would not have. But so what? Does it answer any of the fundamental, real, questions? I’ve found more and more that we are merely stuck in our own dimension, on our little blue planet, yet we think this is everything. We need to zone out more often. If we don’t understand consciousness, or how we have self-awareness, we do not even truly know how we built drones. As Nietzsche theorised, we must engage in a mindset that goes beyond good and evil. This is because everything is relative.

If everything is relative, then, the belief that we have progressed is logical if we compare it to where we are before, and our measuring stick is defined by our success now relative to our success before. However, if we see progression as obtaining authentic, true, fundamental understanding of ourselves and the world around us, have we really come so far?

Going back to the pyramids — we do not even truly understand how we built those pyramids thousands of years ago, with many skeptics going so far as to theorise that aliens created them. This is laudable – on the one hand, most constantly proclaim that “we are at the peak of humanity!” acting as if we’ve “almost figured out the secrets of the universe”, yet on the other hand, we do not address the fact that despite paper-less planes, we do not understand how they built pyramids. 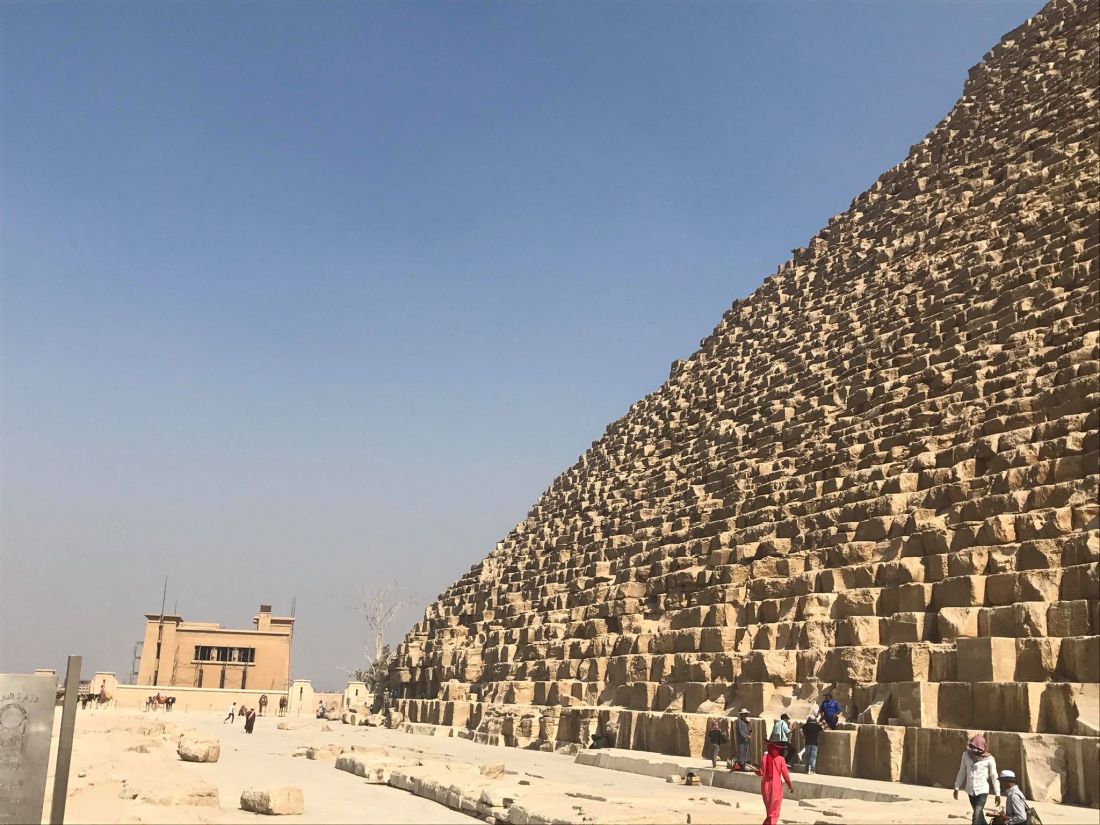 During my first trip to Cairo, I visited the Pharaonic Village in Giza, Cairo. I highly recommend it to anyone going to Cairo. It is basically a historic park, where they replicated what life looked like “back then.” They replicated a poor man’s house, a working man’s house, and a rich man’s house. They had people working the fields, women kneading doe, as we went down the boat on the stream. I was the only one on that boat, which had loud, almost cringe-worthy (at least for me, a self-proclaimed introvert) touristic music (you know the type). They also had a few small museums, relatively empty, and dark. I was one of the only people in that entire village.* My tourguide was a kind, relatively young man, who, at the end of our tour, spoke to me and urged me to be careful traveling alone as a woman in Cairo. When he showed me how they mummification of ancient Egyptian people’s, including the removal of all internal organs, which would then be tried and then placed in separate jars, and the people still living would leave plenty food, and gifts, for the poor, so that they could have them in the afterlife. I asked him, if they saw that the food never disappeared, and stayed there, why did they keep on believing those in the afterlife could receive it? He laughed a little and didn’t say anything.

*Side-note: this was in 2017, in 2018 the tourism in Egypt is already steadily picking up and will most likely continue to do so in the foreseeable future.

It was during my visit to the Pharaonic village where I learned of the two main theories on how they were built. It is not just the sheer size that baffles people but also the unique shape of a pyramid does not render it easy to be built. Both theories maintain, first, that it was on the backs of thousands of slaves. The first, they would build square-shaped slabs on top of each other, from widest to smallest, and then build structures on the side to add the limestones to make it in the shape of the pyramid. The second theory, maintains that they built slowly increasing upwards-structures around a center they had first built, dragging limestone up that way. The third maintains that they built one structure on the side, where they’d carry limestone up. Each of these do not explain it very well, or in detail, but I took photos of mini-structures inside the small museums that will most likely do a better job of explaining: 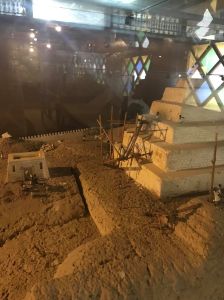 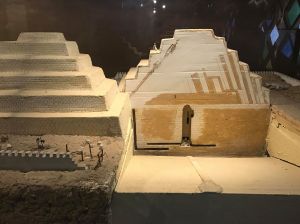 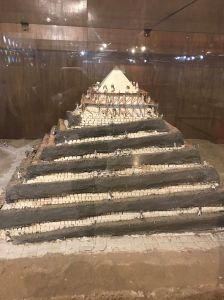 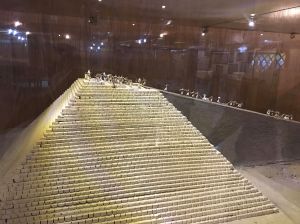 Regarding my personal trip to the pyramids, a female tour-guide I had for the first day took me (I discarded her after that and never used another tour-guide again – personally think it’s much better to do things on your own, own time, free of their wiry ways of taking you to their friend’s stores to make money and their incredibly overpriced charges), and I went on a camel, whose name, apparently, was Bob Marley, and the young man who was taking care of him was called Jahid. Jahid would sleep, eat, and live with the camels. He and Bob obviously had kindled a very close relationship. 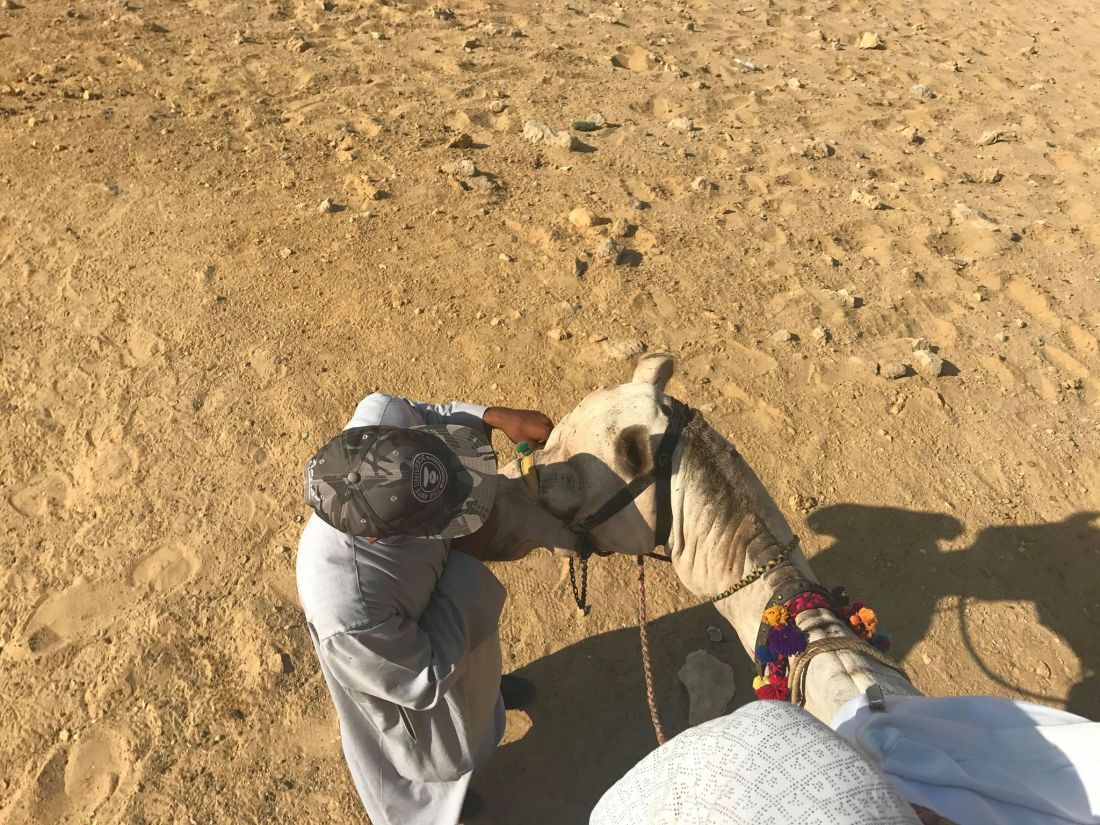 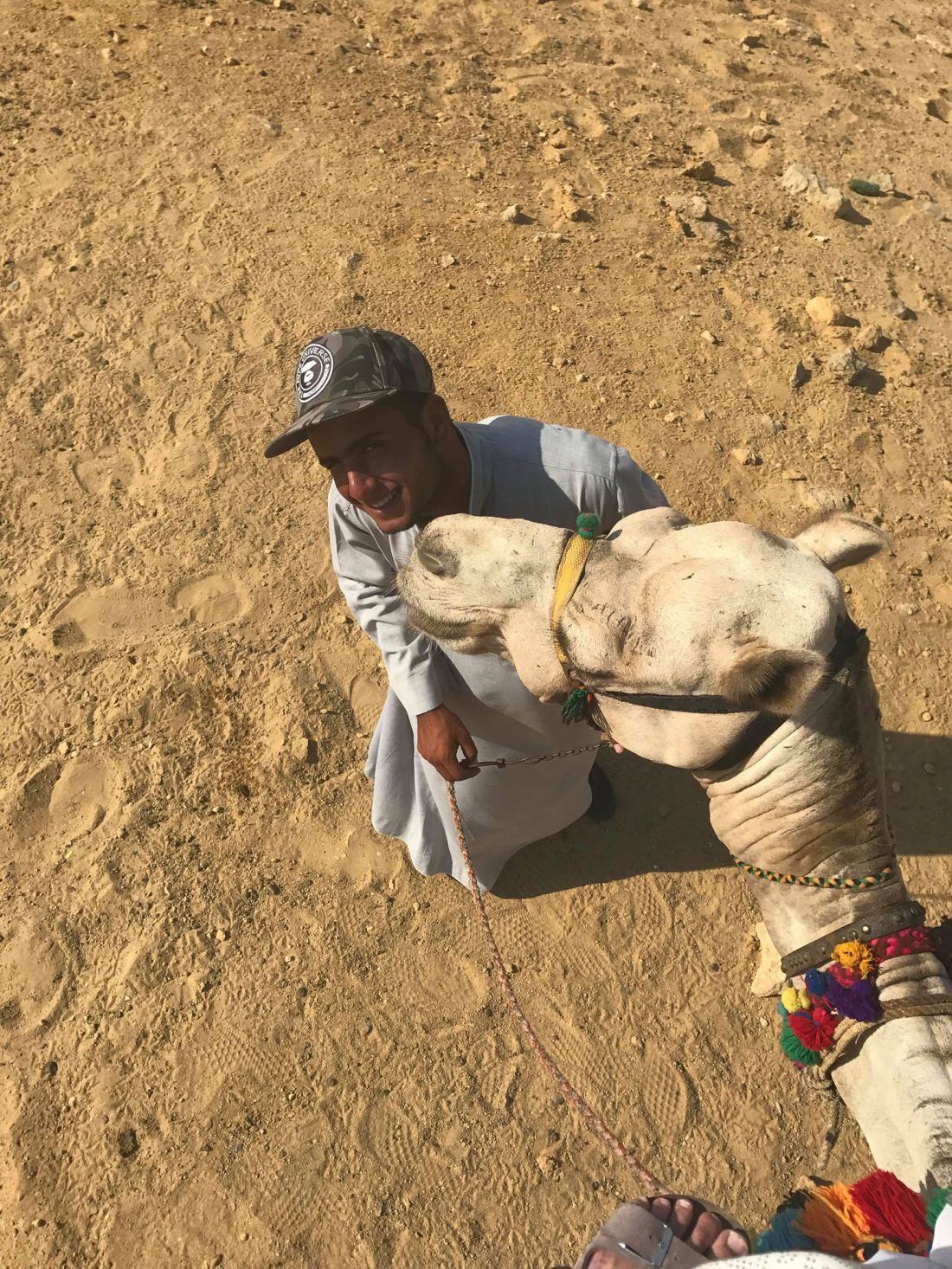 Also, contrary to another popular belief- camels are not slow; he slapped the back of the camel I was on and it galloped forward – I had to hold on for dear life. The reason they are considered slow is because they must work and respect the desert, maintaining their energy. There is no need to be quick, or rash, or hasty, in the desert. So me and Jahid talked, and played music for each other. He had on a sports cap, but a long robe. The greeting of traditional religion and mass consumerism. What a sight. At one point, when he had my phone and was taking a picture of me on Bob the camel, he picked up a large rock, and told me to put up my hands. I was a little alarmed, but I did as he said. This was the result. 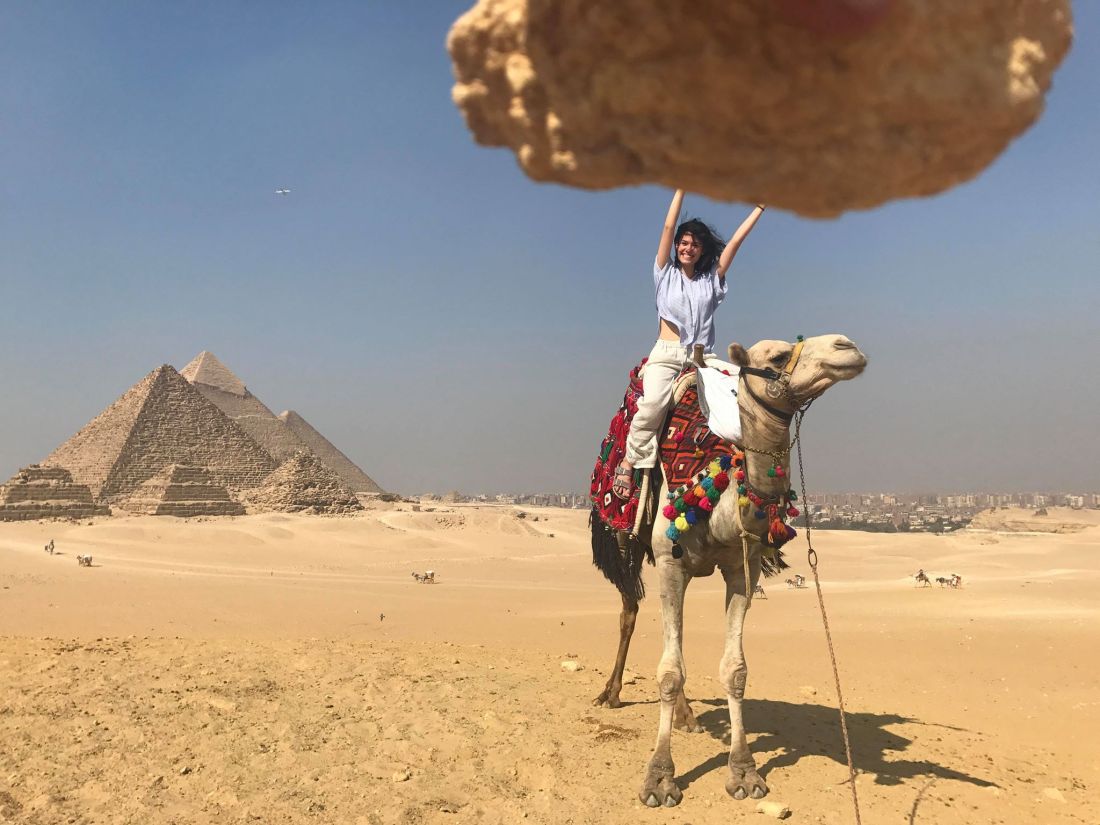 One cannot speak of the Giza pyramids without speaking of the Great Sphinx of Giza. This was more beautiful, to me, intrinsically. I’m not sure why, it just was. 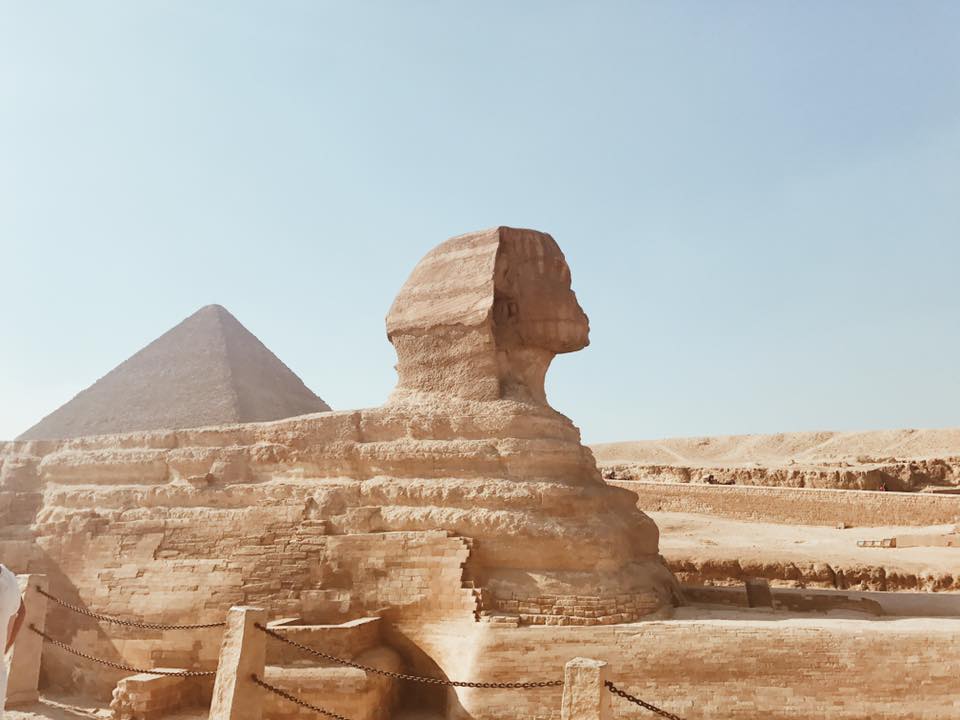 Similarly to the pyramids, there are many theories as to how the Great Sphinx was built, which I will not go into here. It has suffered much deterioration due to time, however many believe the statue’s nose was shot off by Napoleon’s troops, others believing it was destroyed by Sufi Muslims in a protest.

One can wonder what the Truth with a capital T is.

I write this from Abu Dhabi on my layover flight from Shanghai, where I was writing my MA dissertation and spending time with my mother, to Cairo. How surreal.