Whether you believe there is a God, Gods, or that there is nothing else other than us, or that everything is just waves, vibrating on some form of energy, or that there are infinite other realms, or that we are merely simulations – whatever it is, they are all attempts to understand the universe around us, indeed, how we came to be, and why.

Often times my friends berate me for going off on what they call “philosophical” tangents, laughing and saying “oh there she goes again” or “this is too philosophical for me right now”. Yet isn’t philosophising merely the act of being a human? A self-aware, conscious human, that is. To speculate, to theorise, yes, to philosophise- about our existence- is this not the most common and fundamental thing of man? For a man not to wonder where he came from, well, he must not truly understand what it means to be alive-  how miraculous it is, that we are here, conscious, self-aware; that all of this around us, is here. I’m not sure if I envy that man. For those angry atheists (of which I used to be one) – name a culture or time where man didn’t have some form of a “religion”? What is culture without religion? At what point do you draw the line between culture and religion? Granted, they have some different elements, but the point is they are inextricably intertwined. Ergo, religion should not be scoffed at, dismissed, or ridiculed- neither should philosophy.

Yet there is an age old argument between philosophy and religion. Many philosophers were persecuted or executed for their condemned thoughts on monotheistic religions. Perhaps most famously, poor Socrates, for not believing in the god of the state, condemned to drink hemlock. The list is too long to go through here. In the Islamic world, during the Islamic Golden Age, many philosophers began to use allegories, which led to what we now call the philosophical allegory. This is a tool, a weapon, of philosophers to use, a clever, sly, way, to theorise, stipulate, ponder upon the wonders of the universe without being clad by the iron fist of certain religions. It is similar to the hidden transcript method used by the persecuted Uyghurs in the North-West of China, who practice Islam and are heavily controlled and abused by the government. Here a religious minority, persecuted for their beliefs, uses linguistic tools in their defiance against the wrath of a nation-state, while, ironically, philosophers in the Islamic Golden Age, persecuted for their beliefs used philosophical allegories, to continue to express their ideas without being prosecuted for it by religious entities. Examining the history of man, it may be still up for debate whether war is natural or not, but one thing is clear – man has always persecuted one another for each other’s beliefs.

And so, one of these many ways of pondering about the universe that is particularly intriguing, and beautiful, to me, is Sufism. It is the mystical, spiritual way of understanding Islam, with most of them being Sunni. Sufism emphasises ridding oneself of one’s ego, of materialism, in order to become one with God. Due to their rather spiritual take on Islam, Sufis are often looked down upon by many Muslims, some even believing they are heretical, others believing many of them are on drugs, or crazy. The Islamic State and other extremist Sunni groups condemn them as heretical. In 2017 235 or more were killed in a Sufi mosque bombing in Northern Sinai.

One of my favourite films, Bab’Aziz – The Prince who Contemplated His Soul, is a Tunisian film about a blind dervish traveling with his granddaughter towards a massive Sufi gathering. This is one of the few pieces of art, that is authentic and that I would recommend for anyone slightly interested in Sufism, or just anyone looking at different paths to facing and understanding the world and the universe. This is a film that deconstructs many misconceptions about Islam, and about Sufism.

“Hassan: But there can’t be light in death because it‘s the end of everything.

Bab’aziz: How can death be end of something that doesn’t have a beginning? Hassan, my son, don’t be sad at my wedding night.

Baba’aziz: Yes. My marriage with eternity.”

The people of this world are like the three butterflies
in front of a candle’s flame.

The first one went closer and said:
I know about love.

The second one touched the flame
lightly with his wings and said:
I know how love’s fire can burn.

The third one threw himself into the heart of the flame
and was consumed. He alone knows what true love is.

This brings me to Rumi. Jalāl ad-Dīn Muhammad Rūmī, Persian, of the 12th century, is one of the most read poets in the world. Referred to typically as Rumi, his works have been translated into countless other languages, and has influenced Turkic, Iranian, Turkish, Azerbaijani, and other literatures. And, yes, he was a Sufi mystic. His master, Shams of Tabriz, is often pondered about what the nature of their relationship was – merely student and teacher? friends? lovers? I believe all, their love transcended these categories, they had the deepest, purest, form of love- in all of its being. These are some books I have on Rumi, Shams, and Sufism; given to me by someone very special, and that I know will aid anyone in their journey, regardless of the nature of their journey:

Finally, the moth and flame metaphor, which is said to describe certain parts of Sufism. It is said to describe the relationship between Man and God, or between Shams and Rumi, or to symbolise self-transformation, as the moth’s annihilation occurs again and again as it is always drawn to the flame- the annihilation is said to depict the passing into the Divine (fana) on the Sufi path. Or perhaps the love affair of the soul of the human with That Which We Cannot Understand, which is also Everything. Some call it God. others call it Nothingness.

Moth: I gave you my life.
Flame: I allowed you to kiss me. 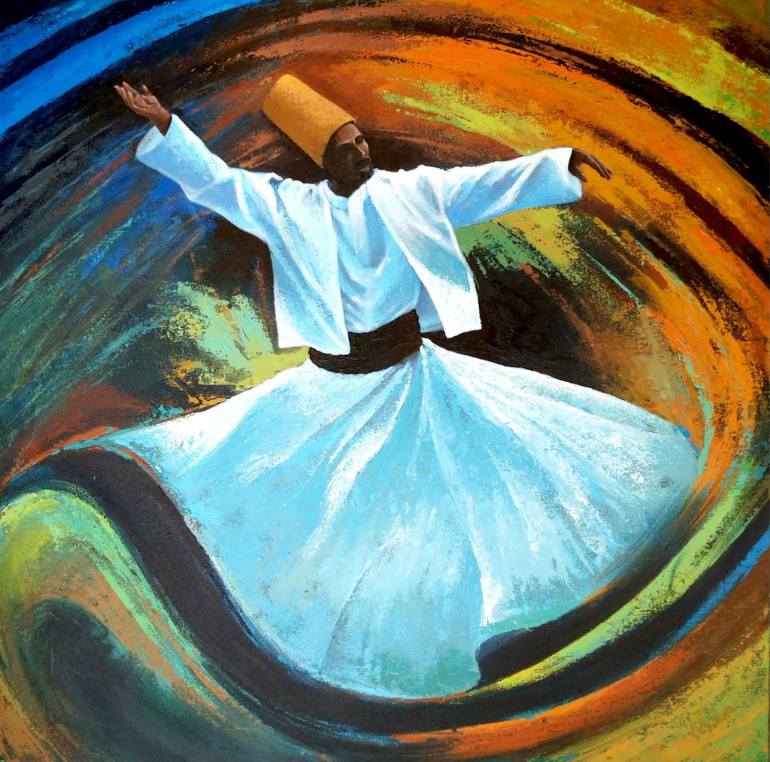